We Need Your Eyes and Ears -- Do you know of or have your heard of any
Bigfoot Sightings, Activity, Evidence or Stories in these areas

And You May Be The Next Person The Searching For Bigfoot Team Visits and
Features In Our 24/7 Live Feed Expedition, Site, Shows and Movies.

Something Very Big bedded down in this 8x10 spot -- Last Night

Moving into base camp for night investigation

Finding Bigfoot Cam -- Moving Into Base Camp For The Night 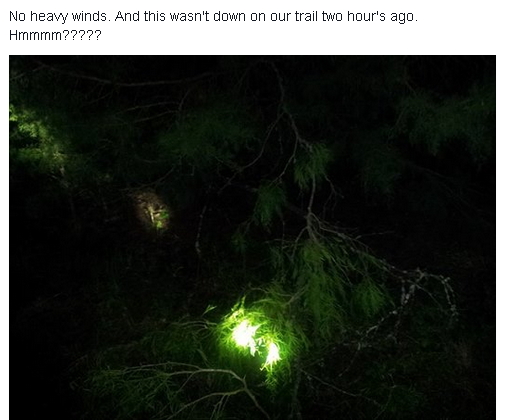 Something Big Has Been Through Here

Rod's Wife Telling Us About Her Bigfoot Sighting Outside Commerce, Texas

Tree down in our path after a night of research that wasn't down coming in --- Hmmmmmm??????

Searching For Bigfoot; The "Wild Man of North Texas"

COMMERCE, TX -- It's a myth still in the making. A legend that has fascinated people around the world for hundreds if not thousands of years. Tales of a large harry creature roaming the forests frightening unsuspecting travelers and now that legend has come to our area. For the last several years a quiet family in the small town of Commerce Texas says they've been hearing strange sounds coming from the forest. Howls they say are so full and so deep that they vibrate you insides. Vocalizations they say no human is capable of making, even with a bull horn.

Bill Gibson and his family have been living in this house on the east side of town all their lives. Bill recalls the first time he heard what people in the area call the "Wild Man of North Texas." It was 40 years ago.

"You can actually feel it in your body. The only way I can describe it is like when a train is running real close to you and you want to just take off running," said Gibson.

Bill's son Jeremy was just ten years old when he first heard the sound. He says he's been haunted by the creature ever since. "I know what's out there. I know it." "What's out there?" "Something big."

After years of silence, the Gibson's say the "wild man" has returned, waking them up in the mornings with it's howls. But, this time they called in renowned Bigfoot hunter Tom Biscardi to investigate.

"We know that something has been through here in the last three days," Biscardi said. We've all heard the stories. But we can assure you, whether or not you believe in Bigfoot is the last thing on Biscardi's mind, because he says he's seen one.

"When first I started out I was a doubting thomas, excuse the pun. But then after I saw one and I got real close, I said to myself my god," Biscardi said.

Biscardi and his men found what they believed to be several large foot prints in a clearing about a mile away from the Gibson's home. So, they set up a perimeter, hung bate and strapped infrared motion sensor cameras to the surrounding trees.

Regardless of what you want to call the creature, Biscardi says he truly believes that a species exists that is so smart, and that has adapted so well to the arrival of human population, that it has become an expert at avoiding detection and capture. Biscardi believes it so much that he's dedicated his life to finding the creature and recently his company "Bigfoot Projects Investments Incorporated" became the first of it's kind to clear sec regulation and go public on the stock market. The mission statement of the company: "To capture the creature known as Bigfoot."

"I feel very proud," Biscardi said. "This is one thing that we've crossed over to mainstream America. We've taken a myth, a legend, a folklore and brought it to reality."

Now that the bait was set, Tom and his crew decided to check out another area believed to be the creature's stomping ground. But an hour long downpour made getting to the location nearly impossible.

So the crew decided to return to the site of the traps for one last listen before turning in for the night. (TJ howling). Biscardi's son TJ belts out a howl into the darkness in hopes that the creature has an answer. (silence). But, it doesn't.

While our day's search only yielded a couple of footprints, Biscardi says tomorrow is another opportunity and that he will never give up.

"It's a whole new day and a whole new adventure," he said. One day, he says, he'll prove to the world that he's been right all along. "They're seeing something out here," said Biscardi. "Can all these people be wrong? Or, are they all right and there's something wrong with us? You never know."